Therapeutic peptides have been attractive drug candidates for several decades due to their specificity, potency, and low toxicity. The challenges to their delivery at therapeutic levels to the site of action have been well documented – relating in most part to their stability in different physiological locations and pharmacokinetics. Because of their rise in popularity among drug developers, a plethora of drug delivery and formulation strategies have been employed to enable their development and/or produce competitive drug products.1 Amongst the first was the development of sustained release formulations, utilizing the biodegradable polymers PLGA and PLA (microparticles and implants), and later self-assembling peptide formulations. These formulations reduced the injection frequency to once monthly and longer, albeit through large gauge needles that are painful to inject. Such formulations were, and still are, blockbuster products, particularly in oncology where the fear of injection pain is far outweighed by the benefits of the treatment. The fact that many of these sustained release formulations are still generating several hundred to a billion dollars in revenue many years after their patent expiry (e.g. Zoladex, Decapeptyl, Somatuline Autogel) demonstrates the importance of peptides as therapeutics – enabling access to challenging targets via alternative pharmacophores – but also offer the benefit of using novel drug delivery strategies.

A recent review of marketed peptide products showed that almost all routes of delivery have been successfully employed for peptides, however the majority are injected, and alternative routes - such as oral, nasal and topical are typically used for local rather than systemic delivery. A significant barrier to the systemic delivery of peptides is that their biopharmaceutics is not well understood – whether that be the absorption and distribution processes following injection or delivery via alternative routes – and the impact of changes to the formulation on performance are difficult to predict. A recent industry sponsored session at the Controlled Release Society (CRS) annual meeting was dedicated to this topic for the injectable route as a “Grand Challenge” but this could no doubt be expanded to oral, nasal and inhaled delivery of proteins and peptides, and there is a considerable amount of work to be done in this area to better understand this.

This is perhaps no better demonstrated than the recent discoveries made through the development of Rybelsus (oral semaglutide) by Novo Nordisk. Prior to its development, the target for orally delivered peptides had been widely accepted to be the small intestine.2,3 However exquisite clinical evaluation (some performed at Quotient Sciences) together with supportive preclinical studies demonstrated it to be absorbed from the stomach. This not only went against the prevailing dogma, but together with the approval for Mycapssa (oral octreotide) by Chiasma have demonstrated that systemic delivery of orally administered peptides to therapeutics levels is possible, and the use of absorption enhancer technologies is acceptable to the FDA, EMA and PmDA.

As discussed above, the biopharmaceutics of delivered peptides is poorly understood and the critical performance formulation / delivery system variables can be uncertain - whether that be for systemic delivery, local delivery or delivery route switch.  While data in preclinical models can be useful, they may not be translatable to human subjects. To bridge that gap, we have worked with numerous clients on a range of peptide formulations and delivery systems, across a range of routes of delivery to optimize their product, informed by clinical data in healthy volunteers. Not only does this provide a more relevant evaluation of performance, it can also provide a unique insight into the biopharmaceutics of their product in humans – such was the case with Rybelsus. Given the uncertainties, the application of a formulation design space coupled with a flexible clinical trial design integrated with real-time manufacturing can maximize chances of program success and accelerate identification of the optimum formulation. This development strategy can potentially be applied across the full range of delivery routes, formulations, and drug delivery technologies. Below are a couple of case studies of programs recently delivered at Quotient Sciences that demonstrate this development strategy.

Perhaps the most widely employed oral peptide delivery strategy is the inclusion of a penetration enhancer into the formulation to facilitate absorption across the gastrointestinal epithelia. While preclinical work can establish the principle, for use in humans, the optimal concentration of penetration enhancer and/or ratio with the dose of API is difficult to predict. To address this, we performed a First-in-Human (FIH) study on an oral peptide formulated with a penetration enhancer, defining a formulation design space within which any formulation could be selected, varying the dose and penetration enhancer content. To enable assessment of the absolute bioavailability we developed an intravenous formulation. A schematic of the clinical trial design is shown in Figure 2. Real-time manufacturing was employed, based on the formulation that was dosed and the emerging clinical data prior to the next dosing occasion. At the end of the study, we had defined the relationship between the functional excipient and oral exposure of the peptide and completed a Single Ascending Dose (SAD) and Multiple Ascending Dose (MAD) evaluations to enable further development. 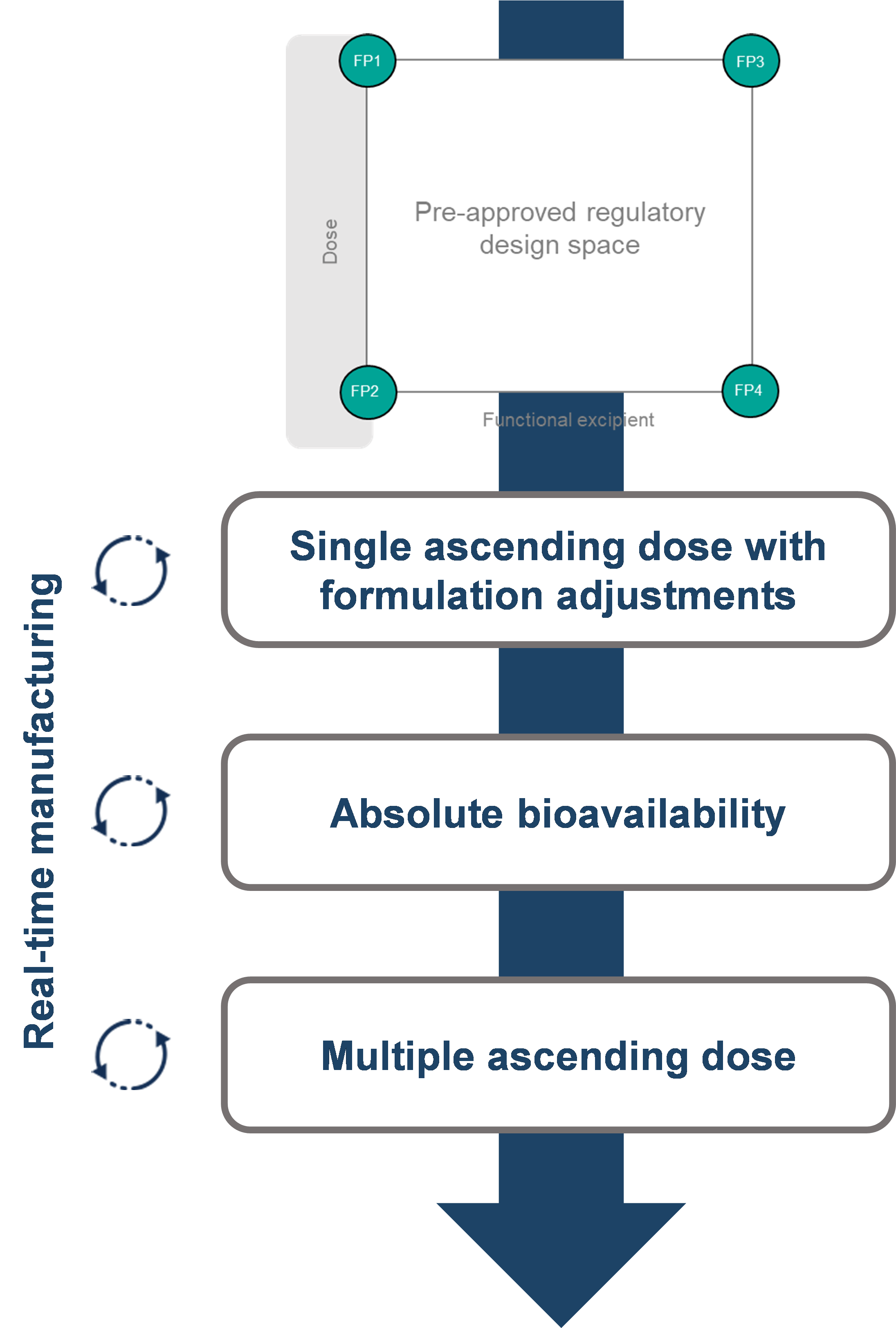 Our client had already demonstrated Proof-of-Concept (POC) for their peptide via the intravenous route (IV), however this route of administration was not considered suitable for alternative target indications, where patient self-administration would be required in order to develop a competitive product, and a subcutaneous (SubQ) formulation was therefore desired. The aim of this program was to develop a formulation that would achieve the desired exposure while minimizing injection site reactions. As discussed above, the impact of key formulation variables on these can be difficult to predict, and to maximize chances of success we employed a two-dimensional formulation design space enabling flexibility to increase the dose by either concentration or injection volume (Figure 2). Formulations to be dosed in healthy volunteers were selected from anywhere within the design space, informed by the pharmacokinetic and tolerability data from the preceding dosing period, and manufactured in real-time within the clinical study. Six formulations were evaluated, eventually resulting in us identifying a formulation that matched the intravenous AUC, providing our client with a product suitable for self-administration and opening up the possibility of using the drug for a wider range of indications. 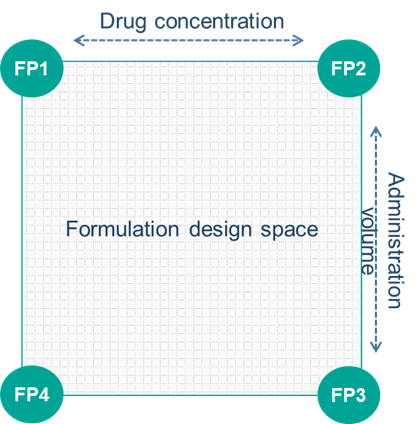 Peptide therapeutics are attractive drug candidates with the potential to address numerous indications, but their formulation and delivery can be challenging. The utilization of a formulation design space together with an integrated manufacturing and clinical testing strategy, can not only mitigate development risk and accelerate development, but also provide powerful insights into the biopharmaceutics of the delivery system following administration.

Share this article
Inhalation
Scientific Poster Spotlight: Development of an X-ray Diffraction Method for the Quantification of API Recrystallized from Amorphous API in a Low-Dose Dry Powder Formulation Used for Inhalation
By Emilie Bergström
Clinical Pharmacology
Spotlight on Clinical Operations at Quotient Sciences
By Ian Nisbet
Share Your Development Challenge with our Scientists
Let's Talk